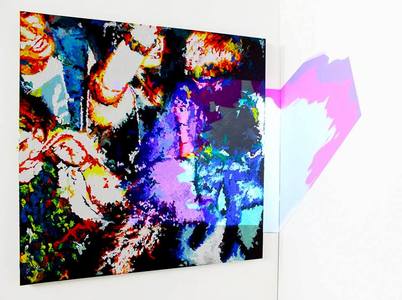 My practice engages with the alteration of nightclub environments over the years, questioning how the colours and layering of lights have impacted the ambience. I am interested in mixing 1970s disco culture and present day clubbing through projection and painting. I combine amateur videos which portray different atmospheres related to contemporary club culture with archive footage of past disco's, focusing on the movement of dancing and surroundings. These films are then projected onto canvas which depicts an abstract image of related imagery which creates a double layer across the two mediums, it also offers a further dimension to the work, altering the colour and giving it a "pulse". I express a confidence in my artwork through the majestic brush strokes which convey the same experience and liberation you would feel whilst engaging with the influence of a night club. Even though there is a substantial time difference from the 1970's to present day, not a lot has changed. People still appreciate the euphoria you receive whilst in that element.