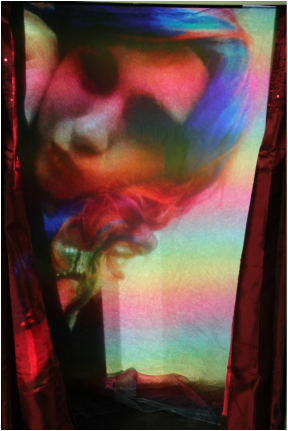 My work has always been tactile as people are often encouraged to interact with the sculptures such as write onto or ‘play with’. The work becomes a platform for people to discuss current issues faced by the LGBT community. The work may be criticised for being controversial due to people not being tolerant or accepting of themes being discussed such as homophobia and may cause people to feel uncomfortable. However, this is like my ‘soap box’ which I am using to convey a story that is still very current in today’s world by using resources such as the news and social medias as well as others and my own experiences to produce works.  When interacting with the work people are encouraged to inhabit another person’s character.

The materials used is a mixture of mediums that all lend to sculpture the work Twilight Peoples Theatre Presents: Walk a Mile in Someone Else’s Shoes is an example of this as the work uses writing, expanding foam, sewing, wood and much more to make my puppets sturdy to be used by many.

My puppet sculptures help people look at the issues though different eyes giving a new perspective on issues that may or may not have even thought about because they have to think about the character to show. ‘Walk a mile in my shoes’ was one phrase that built the idea of people interaction with the viewer.