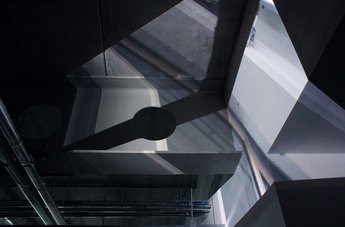 My primary aim is to capture the essence of being and existence. I want to challenge the viewer’s perceptions and make them question how they experience their environment.

Manipulating captured video to create almost frozen moments in time and altering the natural soundtrack to create a contradiction between the two elements. I’ve found that even stillness has a soundtrack full of motion. I then take these re-engineered moments and project them onto the structures of their original environment, reshaping the space and the viewer’s perception of them. The host space has an almost symbiotic relationship with the projection as it wraps and distorts around it’s corners and protrusions. The altered soundtrack finds a new resonance determined by the environment’s shape and surface. This reshaping process triggers the viewer’s questioning of the physical known with the non-physical projection.